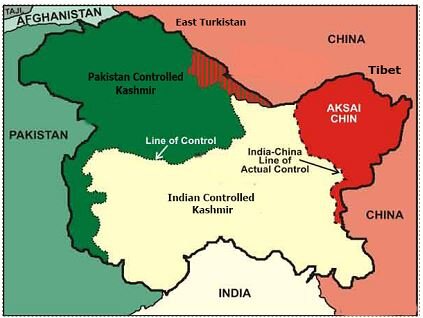 Kashmir is the commonly used political description for the former princely state of ‘Jammu and Kashmir and Tiber Ha Aqsai Chun’. The other commonly used name is Jammu Kashmir State. The State is unique in the sense that it mirrors South Asian religious, geographical and cultural diversity.

Most regions of the State were varyingly independent or mutually allied and at times contesting forces before the Mughals conquest in 1586.

In 1846 British handed over the Kashmir Valley and adjacent areas in the independent possession of Gulab Singh, the ruler of Jammu and his male body heirs for the sum of 7.5 million rupees, half of the war indemnity amount that the defeated Punjabi Sikh rulers who owned these areas could not pay. It is a complicated and contested episode of State’s history.

In the event, the modern state of Jammu Kashmir was formed on 16th March 1946 when a Amritsar treaty was signed between the representatives of British East India Company and Raja Gulab Singh of Jammu.

During a century-long Maharaja Rule (also known as Dogra rule as the ruling dynasty was called Dogra dynasty), the State was significantly consolidated on the pattern of modern nation state. The monarchic rule was defeated by the popular politics in 1947 as the British colonialism divided the Indian subcontinent.

The UNO brokered-ceasefire inadvertently consolidated the division of  Kashmir under the control of India and Pakistan who discouraged pro-independence politics across the dividing line and initiated a multi-layered process of Indianisation and Pakistanisation in their respective regions.

Resistance emerged on both of these processes in various forms and shapes leading to several wars and internal rebellions. The response to the voices against the Occupation on both sides have been brutally crushed. Presently, the Kashmir Valley remains the victim of constant and most

brutal violations of human rights by the Indian forces, a process going on since the 1990s.

Ever since, over 70,000, mainly civilian Kashmiris, have been killed while many times more injured and displaced. Over 10,000 remain missing.

Today although pro-independence Kashmir politics, media and literature is banned by both Indian and Pakistani states, the voices for independent Kashmir are the fastest growing voices across the State along with the demands for the recognition of regional, religious and cultural diversity in the State.

While India and Pakistan continue spending big chunks of their budgets on building weapons of mass destruction to feed the global war industry, the people of the divided state of Kashmir in Ladakh, Jammu, Valley of Kashmir, Azad Kashmir and Gilgit Baltistan want demilitarisation, freedom of all political prisoners, demolition of ‘illegal laws’ and ‘unconstitutional constitutions’ to let citizens of the state defined in the 1927 legislation of the State Subject to decide their fate through a fair, free, democratic and inclusive mechanism

Thanks for your support